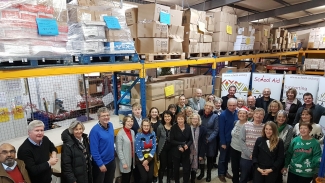 The Rt. Hon. Sir Scott Baker is a former Lord Justice of Appeal. He was a governor of Caldicott School. He was the judge in the Inquest of Princess Diana & Dodi Fayed. He holds the part-time office of President of the Bermuda Court of Appeal.

The Rt. Hon. Lord Brown of Eaton-under-Heywood was a Law Lord and a member of the Supreme Court, & President of the Intelligence Services Tribunal among other appointments. As a crossbench peer he is a regular contributor to the work of the House of Lords.

The Lord Pannick Q.C. is a prominent crossbench member of the House of Lords, a Q.C. in constant demand to appear in high profile cases both in this country and abroad. He is an author and a regular contributor to The Times on law related topics, and a fellow of All Souls College, Oxford.

Lady Baker is the founder of School Aid. She was a primary school teacher and is the wife of Sir Scott Baker. She was awarded the Paul Harris Fellowship by The Rotary Club of Chesham in recognition of her work in founding and developing School Aid in support of African education.

Secretary to the Trustees

Roy Abraham was ​a Councillor on Chesham Town and Chiltern District councils and a former Chesham Town Mayor. He is currently a Panel Member of the Thames Valley Police, (Complaints, Integrity and Ethics Panel) and a Governor of Amersham and Wycombe F E College. He joined School Aid as a Trustee in 2004 and has strong links with East Africa.

Rob Walther worked for Clerical Medical for many years in a number of roles, finishing as Chief Executive. More recently he has worked with Nationwide, retiring as Deputy Chairman in 2012. More importantly (at least in his view!) he sailed the Atlantic with two friends in a 36 foot boat.

Elisabeth Elias qualified as a barrister. She was President, chaired the Board of Trustees of Amgueddfa Cymru - National Museum Wales, where she was a Trustee. Prior to this, from 2000 to 2007, she chaired the Girls' Day School Trust, one of the largest charities in the UK, responsible for 26 independent day schools. She has been involved in education and governance, through schools, universities and museums, for many years.

Ian Hodgson was a solicitor and partner at Slaughter and May in both London and Hong Kong. He spent 30 years with the firm before retiring in 2013 although he remains as a trustee of various of their pension funds. Since retiring, he has taken on a number of voluntary positions in the education sector including Deputy Chairman and Trustee of The British School at Rome, the development committee of Oundle School and Trustee and Governor of Coleshill Infant School. He is also heavily involved in the sports sector being Chairman of Buckinghamshire County Cricket Club, a director of Denham Golf Club and on the Real Tennis and Squash Committee of the MCC.

Amish Nathwani has extensive experience of operational and technology risk management, control and governance, particularly in financial services. His career over 35 years includes working in senior positions at PricewaterhouseCoopers (PwC), DeutscheBank and more recently at the Bank of England. Since retiring in 2017, Amish has focused on doing voluntary work in the health (restoring blindness and eye care) and education sectors. As well as being a Trustee of School Aid, he is a member of the Advisory Board of the (non-profit) Akhand Jyoti Eye Hospital based in India, and a Co-optee to the Audit Committee at United Colleges Group. Amish qualified as a chartered accountant in 1985 and holds a degree in Accountancy.

Cathy Newbury was born and raised in Zimbabwe. She trained as a state registered nurse at Harare Hospital and came to the UK in the early 70s for midwifery and health visitors' training. She worked as a sister at the Royal Free Hospital before leaving to pursue an academic study in the Social Sciences, followed by a 30-year career in Further Education as a teacher and manager. She is a previous chairman of MOPC (Mother of Peace Community) a charity that supports an HIV/AIDS orphanage in Zimbabwe. She is currently a trustee for The Merton Home Tutoring Service, and a volunteer with SFAC (Strengthening Families for Abandoned Children) where she produces teaching resources for carers in orphanages in Africa, South America and the Far East.

Penny O'Regan is a UK born citizen but grew up in Southern Africa. Having lived in various other countries, she is now resident in London. Penny’s working career focused on Special Education, practicing across all levels of schooling in Australia. Since returning to the UK, she has travelled extensively and involved herself in a variety of voluntary roles, with particular interest in educational charities that aim to improve equality either within the UK or overseas, but especially Africa.

Clare joined School Aid in 2008 having previously worked in a number of senior management positions for Clarins UK Ltd. Initially joining School Aid as Operation Manager, she moved to the position of General Manager in 2011.

Thomas has worked at School Aid since 2012, starting as an intern and now handling School Aid operations in the UK and Africa. Tom is responsible for service delivery, overseeing the UK logistics operation, international shipping and coordinating with partners in recipient countries as well as helping process the statistical data we receive for reporting. Managing our fantastic volunteers is also a big part of the role, ensuring that School Aid is a safe and enjoyable place to volunteer.

Narinder came to volunteer at School Aid after retiring from running his own business for many years. When the position of Warehouse Manager became available it seemed a natural fit and now Narinder is keeping our warehouse organised and functioning at peak efficiency.

Michael is School Aid’s first Africa Programme Manager with responsibility for all aspects of delivering and developing new and current African projects. Working closely with our Africa Project Managers, a role he held prior to this, and with schools and partners across Lesotho, Malawi, South Africa and Tanzania, Michael ensures a smooth implementation of School Aid libraries and projects. He has experience in tertiary, public and school libraries, and has a natural flair for languages. He was first exposed to librarianship when he was working as a music librarian for Radio Turf in Limpopo Province. He graduated from the University of Limpopo with a Bachelor of Information Studies.

Moso was born and educated in Malealea in Lesotho, where he was a youth leader, volunteering with HIV/AIDS education in the local schools. He was active in the Adult learning circles and trained local facilitators. He was a trustee for the Malealea Development Trust (MDT), growing the charity from its early days. The MDT was a trust that focused on supporting the local community with literacy and development projects. He has a Diploma in Adult Education and a BA in Development and Environmental Studies at the National University of Lesotho.

Refiloe was born in Maseru, Lesotho in 1990. She went to a local school at Mazenod, Maseru. She holds a Diploma in Education Primary from Lesotho College of Education. She worked as a Student Teacher at Tlametlu Primary School in 2012. She has worked as a Class Teacher at Get Together English Medium School since 2014, where she is now working as An Assistant Teacher.

Kondwani worked as a teacher on graduating in Education Humanities, and more recently worked for the President of Malawi's office and cabinet. His role involves the development, implementation and monitoring of School Aid libraries, principally in the District of Rumphi, Malawi. He identifies appropriate schools; helps to provide library facilities and training for library assistants; liaises with schools, NGOs, local government departments and School Aid offices; and mentors local volunteers.