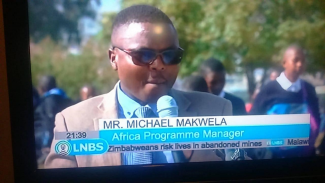 The event was well attended, with representatives from the Ministry of Education, entertainment from The Lesotho Defence Force Band, plus a film crew from Lesotho National Broadcasting Services, LNBS. Michael Makwela, our African Programme Manager appeared on their evening broadcast talking about the legacy of the library and what it will achieve for both school and community.