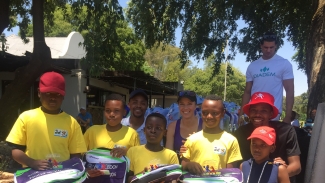 Sports equipment donated by Wimbledon All England Lawn Tennis and Croquet Club has been sent to Irene Country Club in the Gauteng province of South Africa, located between Pretoria and Johannesburg.

The Club runs a Tennis Development Programme for the Irene Middle School, which is local to the club, providing a sporting opportunity for the children, which they would otherwise not have.  Most of the children come from extremely poor families.  A yearly event is held for the children and their parents and this year around 200 people attended, which included past pupils from the school.  There was lots of laughter and fun as the children demonstrated their sporting skills to very proud parents.  The children and the parents were treated to a meal and a cold drink and individuals and teams were awarded medals, trophies and gifts.

Irene Country Club has thanked School Aid for making it all possible and for giving the children and their parents such an extraordinary day.