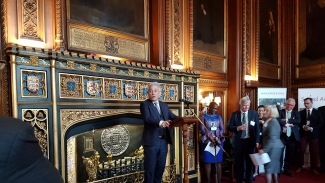 School Aid celebrates its 20th Anniversary at the House of Commons

Trustees and friends were invited to the Speaker’s Chambers at the House of Commons by the Rt Hon John Bercow as part of the 20th Anniversary celebrations.

Speaker, John Bercow, spoke very warmly about the work School Aid is doing and the commitment of volunteers and supporters.

We were delighted that Ntebo Phahlane, Principal of Tsosoloso Ya Afrika Secondary School in Johannesburg was able to attend and speak about the impact that donated books have had on learners at her school.