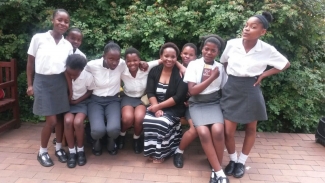 Schools take part in a quiz, as a way of encouraging children to read books

Mike Makwela, South Africa Project Manager, had organised a Schools' Quiz, as a way of encouraging children to read books.

The Cosmo City Primary 1 and Impala Cresent Primary School were two of the schools who took part in the Phendulani Quiz at the Roedean School on the 26th September. There were several schools who took part. The schools received between 14-16 books, which they needed to read in preparation for the quiz. Learners were divided into two teams from the same school. The learners were given evaluation sheets and booklets which they used to answer questions. The learners were supported by the Library Assistants. There were spot questions asked and learners were given a ten Rand note or a book for every right answer given. The learners were so very excited to be part of the reading event.  They received books, certificates and other wonderful gifts. They all agreed that it was a great experience and are looking forward to another quiz next year.